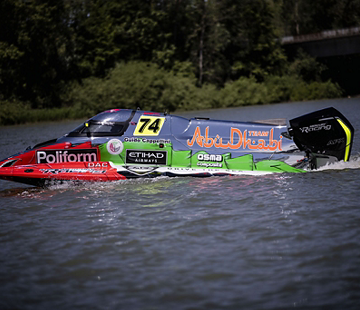 “This will be a great test for the Mercury Racing 360 APX,” said Stuart Halley, Mercury Racing general manager. “We designed the 360 APX for F1 sprint events on a closed course, but this extended race should prove the endurance of this powerful, low-emissions four-stroke competition engine. We are excited to have the legendary champion Guido Cappellini at the wheel in this historic event.”

The Pavia-Venice International Motorboat Raid was created in 1929 by Neapolitan engineer and boating aficionado Vincenzo Balsamo, and has since been organized by The Pavia Motorboat and Venice Motorboat Associations. The 2021 event will be the first running of the Raid since 2006, as low water levels in the rivers made it impractical to hold the event. That 2006 edition was won in record time by Dino Zantelli in a Clerici tunnel hull powered by a Mercury Racing outboard, which reached a top speed of 126.4 mph, and won the Montelera Cup in the Revere Pontelagoscuro section, hitting 123.8 mph.

Cappallini, age 61, capped a 23-year powerboat racing career by winning his record 10th Formula 1 title in 2009, after which he retired as an active racer in the series and began racing in Class 1 Offshore events. He is now the team principal and manager of Team Abu Dhabi. Cappallini has never before entered the Pavia-Venice International Motorboat Raid.

The Pavia-Venice International Motorboat Raid traditionally incorporates spectator festivals along its route. The race is open to a number of different boat classifications, from the fastest F1 tunnel hulls to personal watercraft and even air boats. The Vincenzo Balsamo Trophy is dedicated to the memory of the founder of the Pavia-Venice Raid, awarded every year to the driver who sets a new record average speed in their classification. To claim that title Cappallini must exceed the record set by Zantelli in 2006. The Teo Rossi di Montelera Cup, in memory of Count Teo Rossi di Montelera, who participated in various editions of the Raid Pavia Venezia, is awarded to the competitor who averages the highest speed in the 55-km (34.2-mile) Revere-Pontelagoscuro timed section.

The 360 APX outboard, the most-powerful model in the Mercury Racing Apex Series of outboards designed for closed-course competition, is based on a modified version of the Mercury Racing 300R 4.6-liter V8 powerhead. The engine is normally aspirated and retains its double overhead cam/four-valve architecture. The compression ratio is increased from 10:1 to 11:1 and peak rpm is boosted from 6400 RPM to 7000 RPM. The powerhead is fitted with a short-runner intake manifold mated to a cold-air induction system vented through the cowl. The engine calibration is modified to take full advantage of the powerhead modifications. A digital control offers smooth and precise throttle application. Additionally, this engine offers 90% lower emissions than current two-stroke racing engines.

“The engine, designed with input from the UIM and H2O Racing, significantly reduces exhaust emissions while at the same time providing the speed and excitement that powerboat racing fans expect from our flagship series in circuit racing,” said UIM President Dr. Raffaele Chiulli. “The UIM supports full implementation of this engine, which demonstrates our commitment to lowering carbon levels in our sport.”