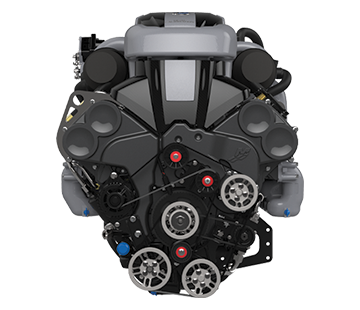 Our Product Integration Manager Mike Griffiths recently returned from the Thunder on The Snake jet boat races in Lewiston, Idaho. Mike was there to support a project he had been involved with for a year now; the fitment of a QC4v 1350 in a jet boat. Say what? Yes. Mike and our associates at Mercury Canada successfully installed the first QC4v 1350 coupled to a jet pump.

Spencer King, of Hay River, Northwest Territories, Canada is an eight time World Jet Boat Champion.  In recent times – turbine powered competitors have taken the upper hand against his 20-foot jet boat powered by a custom built 900 h.p. Ford engine. We’ve experienced a similar trend in offshore powerboat racing. The teams that could afford turbines converted – and were the ones to beat until the QC4v arrived on the scene. I will never forget Key West – I believe it was 2011 – when Bob Bull spanked a well known turbine competitor at the SBI Offshore World  Championships. He passed them like they were standing still. We had a 1650 Competition on display in the poker run village. People lined up to sneak a peek and snap a photo. They couldn’t stop talking about it.

Spencer is co-owner of Kingland Ford – an automotive and Mercury Outboards dealer. He knew he needed to update his power.  He also felt compelled to go with something with factory support. He contacted his resources at Mercury Canada for suggestions. That’s when Mike got the call. He didn’t hesitate to suggest QC4v 1350 power.

The 9.0 liter engine, running on 91-octane pump fuel, cranks out massive torque (1300 lb. ft. from 2500 to 5500 rpm!) The 1350 and its competition siblings have earned a reputation for both performance and durability in recreational and competitive applications.

Mike committed to the project after discussing it with Spencer and Mercury Canada. Mercury Racing technicians spent the winter converting the engine for jet propulsion.  “We took things off the engine that jet boats don’t need. The transmission was one of them,” Mike said.

Spencer purchased a new 22-foot Outlaw Eagle Performance Boat to make room for the 1350.  He named it Sunset Shaker. Mike traveled to Outlaw Eagle in the spring to assist with the rigging.

“I went through the process of wiring the boat for the engine, water and fuel,” said Mike. Spencer fabricated a coupler to enable the 1350 to be coupled to an American Turbine jet pump.

Jet boats are piloted by a driver and navigator. Spencer’s navigator is his father Russell King. After testing and dialing-in the rig – Spencer and Russell were ready to race. They selected the  2015 World Jet Boat Championships as their first event. A total of 60 teams, representing the U.S., Canada, Mexico and New Zealand compete for 10 days – racing 550 miles through the rivers of Western Canada.

Out of the box, the 1350 powered Sunset Shaker  approached 130+ mph speeds. Not bad for its inaugural competition. Still – it wasn’t quite enough to squelch 1,800 h.p. turbine powered competitors capable of speeds in excess of 140 mph. Even with the power gap – they finished an impressive fourth overall.

“It’s a new boat, the engine is new to us, and just finishing these marathons is a feat,” said Spencer.

“He ran for ten days without an issue and a lot of racers took note. We’ve received a lot of inquiries regarding the 1350 following this year’s World Jet Boat Championship,” Mike said.

Spencer’s engine is coming back to Racing where our technicians will work their magic, converting it to a 1550 competition model. While that is being done – Spencer plans to make modifications to the hull – in hopes to reduce weight while enhancing the drive line in preparation for increased power.

I’m looking forward to seeing how he does at the 2016 Worlds. My guess is he’ll have people lined up to sneak a peek of the engine that beat the turbines.