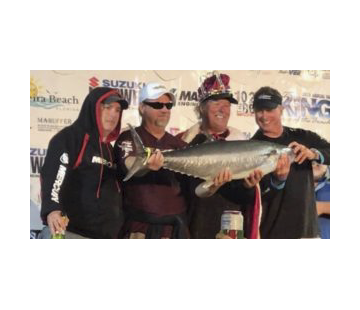 The Mercury Racing/Pro Marine USA fishing team led by Capt. Jim Naset won the prestigious Old Salt Fall King of the Beach kingfish tournament on Nov. 9 in Madeira Beach, Fla., with a 40.67-pound King Mackerel. The open tournament attracted 488 entries in five divisions. The four-person Mercury Racing/Pro Marine USA team (co-captain Kevin Hannon and crew Brain Brandano and Rick Cook) won a total of $94,578, including the $60,000 prize for first place in the Open Class and additional winnings in side tournaments.

“We cast off at 4:15 a.m. and planned to run about 85 miles offshore, but the seas were big and building and we realized we’d be running four or five hours just to our spot, which would leave us very little time to fish and get back,” recounts Capt. Naset. “So we changed plans and ran to an inshore spot on Tampa Bay, where we had one bite all day long, at 9 a.m. That fish was the winner.”

Like freshwater bass and walleye anglers, competitors in kingfishing tournaments operate under tight time constraints. For the Old Salt Fall King of the Beach event, there was no check-out time but anglers could not drop lines to the water until 6 a.m., and had to be in line for the weigh-in at R.O.C. Park in Madeira Beach at 5 p.m. That weigh-in deadline can make boat speed a critical factor simply because less time spent running to and from the fishing grounds gives the anglers more time to fish, and more opportunity to catch the winning fish.

“We often run 100 miles to the fishing grounds in five-to-seven foot seas, which may take three to four hours,” says Capt. Naset, who has been tournament fishing for 20 years. “This leaves us just about 90 minutes to fish before we need to start the run back. With these new Mercury Racing 450R outboards on our transom, nobody can out-run us in flat water. We’ve got a top speed of about 82 miles an hour loaded. Some of the bigger boats might be faster in rough water, but they are running quads and use a lot more fuel, and sometimes have to load fuel bladders on deck to have enough range. We average about 0.9 mpg in a tournament, compared to 0.6 mpg for the quad boats. This boat with the Mercury Racing 450R motors gets its best fuel economy at around 4500 rpm and 60 mph, which is pretty amazing.”

“Mercury Racing says the 450R produces 40 percent more torque than the 400R outboard, and we can really feel that power,” says Capt. Naset. “Over the course of a day our boat weight can change by 5,000 pounds. With less torque and a narrower powerband, we’d have to prop the  400R outboards for our heaviest load of fuel, ice and gear. But we can prop the 450R motors for top speed with a light load and still get the loaded boat on plane effortlessly and have the mid-range punch we need to throttle wave-to-wave when it’s rough. We are running 2.5 inches more prop pitch with the 450R motors, which has improved our fuel economy from 0.7 mpg to 0.9 mpg (29 percent).”

“This is really rough duty for any outboard,” says Naset. “We can run 100 miles at 70 mph and then slow troll for hours, running one, two or three motors and constantly shifting them in and out of gear to follow the fish. Many days the motors are never shut down until we get to weigh-in. We rig our boat like a race boat and maintain it like a race boat, and the Mercury motors have never disappointed us.”