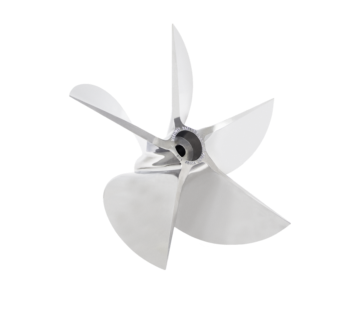 With all the buzz surrounding the latest and greatest outboard power, it is easy to overlook the great sterndrive packages that boat builders are producing. The West Coast continues to be a stronghold for lightning fast sterndrive-powered catamarans and vee bottoms, typically equipped with 502-cubic inch based power plants.  These diehard customers demand superior handling and top speed from their propellers.

Mercury Racing is pleased to introduce the 600HP-Rated CNC Cleaver propeller rated for up to 600 horsepower. Featuring 1.25 inch broached splines, it is designed for Bravo XR Sport and Sport Master drives with Mercury Racing 520, 525, 540, 565, and 600 SCi power. For high-speed applications, this new development gives Bravo XR users the opportunity to run our most advanced propeller technology, which was previously only available for M6 and M8 drives.

All 600HP-Rated CNC Cleavers are to be custom ordered through Mercury Racing Sales via a registered Mercury dealer. Available dimensions are 14.75- to 15.50-inch diameter, 26 to 40 pitch, 15- and 18-degree rake. Every CNC propeller is delivered in a Mercury Racing Propeller Case.