A New Way to Boil Water 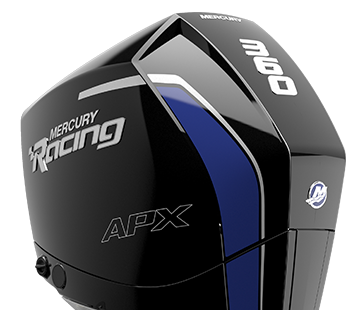 Mercury Racing has created the next generation of competition outboard for Formula One tunnel boats. The new Mercury Racing 360 APX, a potent four-stroke V8, is designed specifically for boats competing on the UIM F1H2O World Championship. The 360 APX outboard is the first model in a new Mercury Racing Apex Series of outboards designed for closed-course competition, and will be available only to qualified racing teams.

“The 360 APX will usher in a new era of performance for this premier class of tunnel boat racing,” said Stuart Halley, Mercury Racing general manager. “It combines a durable, low-emissions, four-stroke powerhead with amazing performance, and will require much less maintenance than the two-stroke outboard currently in use in the F1H2O World Championship.”

“I am excited about the arrival of a new low-emissions competition outboard engine from Mercury Racing, focused at the top level of powerboat racing,” said UIM President Dr. Raffaele Chiulli. “The engine, designed with input from the UIM and H2O Racing, significantly reduces exhaust emissions while at the same time providing the speed and excitement that powerboat racing fans expect from our flagship series in circuit racing. The UIM supports full implementation of this engine, which demonstrates our commitment to lowering carbon levels in our sport.”

Veteran racer and multi-time tunnel boat champion Chris Fairchild acted as a consultant to Mercury Racing during development of the 360 APX, and was the test-boat driver during three week-long test sessions at the legendary Lake X test site in central Florida.

“We set up a course on Lake X that was the same size and dimensions as a course the Formula One boats compete on Europe, and we were able to beat their best times with the new 360 APX rigged on a DAC Formula One tunnel boat,” said Fairchild. “The racers will be very satisfied with the performance of this new motor. We also worked to make this an easy transition for race teams that chose to switch to the 360 APX. The teams will not need to build new boats to use the 360 APX, the gearcase uses the same bolt pattern as that on the current motor, and they will be able to race with the same props they are using now, which is a huge cost savings.”

The 360 APX is based on a modified version of the Mercury Racing 300R 4.6-liter V8 powerhead. The engine is normally aspirated and retains its dual overhead cam/four-valve architecture. The compression ratio is increased from 10:1 to 11:1 and peak rpm is boosted from 6400 RPM to 7000 RPM. The powerhead is fitted with a short-runner intake manifold mated to a cold-air induction system vented through the cowl. The engine calibration is modified to take full advantage of the powerhead modifications. The 360 APX uses a 24-volt starter for faster dock-side starting in competition. A digital control offers smooth and precise throttle application. Additionally, this engine offers 90% lower emissions than current two-stroke racing engines.

The 12-inch midsection is all-new and designed specifically for Formula 1 tunnel boat applications, with a structural wet sump driveshaft housing and integrated power trim and lift with remote pumps. An overdrive spur gearset between the crankshaft and the gearcase increases the input shaft speed to the gearcase to match that of the current 9600-RPM two-stroke race engine, and produces the left-hand propeller rotation desired for Formula 1 circuit racing. The overdrive gears are designed to accommodate multiple gear ratios, so the teams can select the ratio that best fits each particular race.

“The primary purpose of the overdrive is to increase the input speed to the gearcase,” said Mercury Racing Director of Engineering Jeff Broman. “While the 360 APX produces about 45 percent more torque, it doesn’t match the RPM of the 2.5-liter two-stroke. With the new 360 APX we can trade some torque to increase propeller RPM via the overdrive, which will also improve the life span of the gears.”

An evolved version of the Mercury Racing Super Speed Master (IV SSM) outboard gearcase is direct-drive with no neutral or reverse shifting. Above-water exhaust offers unrestricted flow and produces an exciting tone for racing fans. The motor is equipped with integrated, light-weight steering arms for tunnel boat cable steering. The top cowl and driveshaft housing covers are lightweight carbon-fiber composite. The cowl features robust latching and sealing systems, while the driveshaft cover has quick-release fasteners to ease access to the midsection.