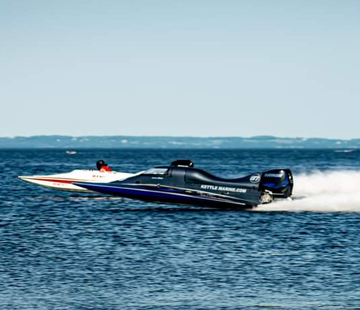 The Upper Midwest Powerboat Association (UMPBA), hosts of a grass-roots powerboat drag racing series in Wisconsin, kicked off the 2021 season June 5 in Oshkosh at the Menomonee Park basin. The event attracted 52 entries from New York, New Hampshire, Michigan, Illinois Minnesota, and Wisconsin. The racing took place on an 800-foot course, organized in six brackets based on a break-out speed. If a racer exceeds the break-out speed for that class, they are eliminated. The brackets start at 65 mph and go up in 10-mph increments to the Unlimited bracket for boats able to topping 105 mph. Like any drag race, success is based more on quick acceleration and reaction time than top speed. Racing is open to boats powered by outboards, inboards and jet drives, and in the slower classes it’s not uncommon for fast family runabouts and bass boats to enter.

That “run what ya brung” approach was on display in the Lake Racer class for boats running up to 65 mph. Marc Gajdos in a 1974 “UFO” with a 1991 Mercury 200 topped Aaron Aschenbren in a Mercury 200-powered 1988 Hydrostream Valaro and Ryan Nueske in a 1982 Sleekcraft Aristocrat, also powered by a Mercury 200.

Nine boats entered Lake Racer 1 (66-75 MPH) where Kristian Kozan, up from Illinois, came out on top racing a Sterling Tunnel powered by a 2.5 Mercury 260, beating out the Hydrostream of Mark K. and Gajdos, who bumped up a class in his UFO.

Lake Racer 2 (76-85 MPH) was the largest class of the event with 15 entries. Paul Passineau in an Allison xr2002 was solid all day and took home first, besting Mark Kirby in a Mirage River Racer the hard-to-miss lime green STV/Mercury 260 driven by Sam Tennessen.

Bob Carlson won Lake Racer 3 (86-95 MPH) in a beautiful 19-foot 1994 Eliminator Daytona with a 1996 Mercury 2.5, a boat he’s raced previous seasons in Lake Racer 2. Rick Cyranoski, a new member of UMPBA, made the trip from Michigan with a 1995 Summerford STV River Rocket with a 2000 Mercury Racing 2.5 Drag outboard and took home a second place. Dan Bugler was third in a Mirage Quartermaster.

Hot temperatures, high wind gusts, and fast boats created the “perfect storm” during Lake Racer 4 (96 to 105 MPH) class. After four quick passes Steve Cleinmark was setting the pace in an Allison xr2001 before a gusting crosswind blew over the Hydrostream of Bill Foner at 102 MPH. The UMPBA rescue/dive team lead by Kelly Chartre from Winneconne, Wis., and UMPBA volunteers were able to confirm Foner was ok and got him to shore for further evaluation. The boat, unfortunately, sank, but with the help of the volunteers and the torque of the Mercury Racing 60R outboard on the transom of the Ambush by Legend Craft safety boat, the Hydrostream was recovered and returned to its trailer. As winds continued to gust the rest of the race schedule was cancelled in the interest of driver safety.

“Boats can be replaced, but the drivers are irreplaceable,” said UMPBA President Brett Seubert. “In this grassroots drag racing club, members turn into family, and they are always looking out for each other.”