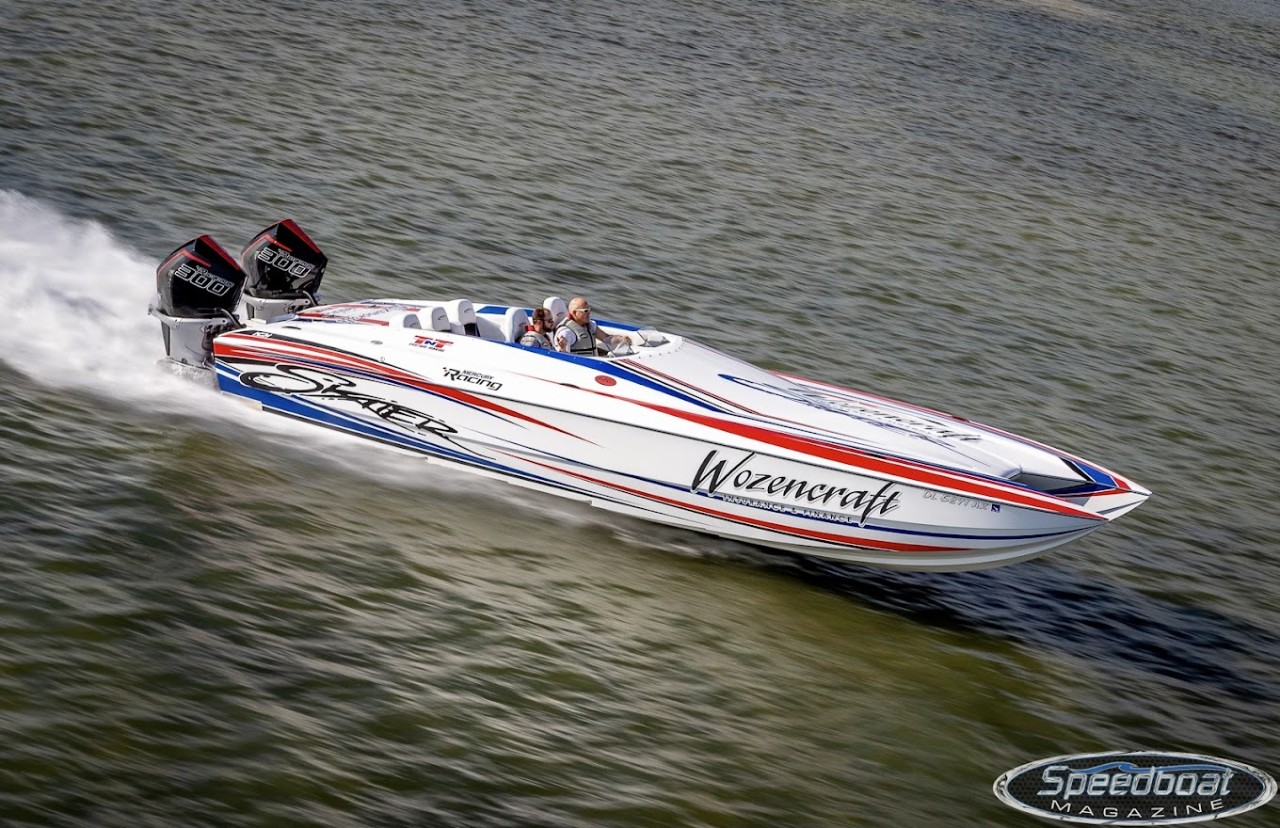 Devin Wozencraft takes the idea of boating to work seriously. His red, white and blue 2015 308 Skater is a floating billboard for his business, Wozencraft Insurance and Finance, which happens to specialize in insurance for high-performance boats. So when Wozencraft attends a poker run, he’s on the job.

“I’m not out there selling at a poker run,” said Wozencraft, 52, who has a home base in Santa Ana, Calif., and offices in Lake Havasu City, Ariz., and Cape Coral, Fla. “But I attend 10 to 12 events a year and get to know a lot of people, and when they need insurance, I hope they think of me first.”

Because his boat is such a familiar sight at the runs, Wozencraft has been reluctant to show up in something newer, bigger or faster.

“The Skater is synonymous with my brand,” he explained. “I tow it myself and with a 9-foot beam it’s easy to take down the road. And when I priced a new boat, I realized what a deal I got on this one when I bought it in 2016. So a repower and refresh started to look like a good alternative, and when the Mercury Racing 300R AMS outboards came out, I knew that would be a great upgrade.”

There was nothing wrong with the Mercury Racing 300XS motors that came on the boat, which were reliable and good for 106 mph on a nice day, but the new Mercury Racing 300R AMD motors offer an across-the-board upgrade in technology.

“The 300R motors are so quiet, which really improves a day on the water,” said Wozencraft. “No more listening to the Optimax air pump, for example. The fuel economy has been comparable, but I can run 87 octane in the 300R motors instead of the REC 90 required by the 300XS, and I’ve realized a huge savings on oil. I was spending almost $250 on two-stroke oil with every fuel fill for the 300XS motors. And the 300R AMS motors come with standard power steering, which has been a revelation. I think power steering is a real safety upgrade on a high-performance boat.”

“We re-worked the entire helm area,” said Wozencraft. “The boat has limited space on the dash so this became a bit of a project, but it was handling beautifully by Ron Muller of Electronics Unlimited in Fort Lauderdale. He created a flat mounting spot for a Garmin 8612 display on the center of the dash.”

Muller also retained a Mercury VesselView 502 SmartCraft display to the left of the wheel, and installed an new JL Audio system and cockpit and underwater RBG LED lighting by Lumishore. The boat interior was all but gutted, and new high-back bucket forward seats, a new aft bench seat and new inwale panels were crafted by Fineline Marine Interiors of Hallandale, Fla. 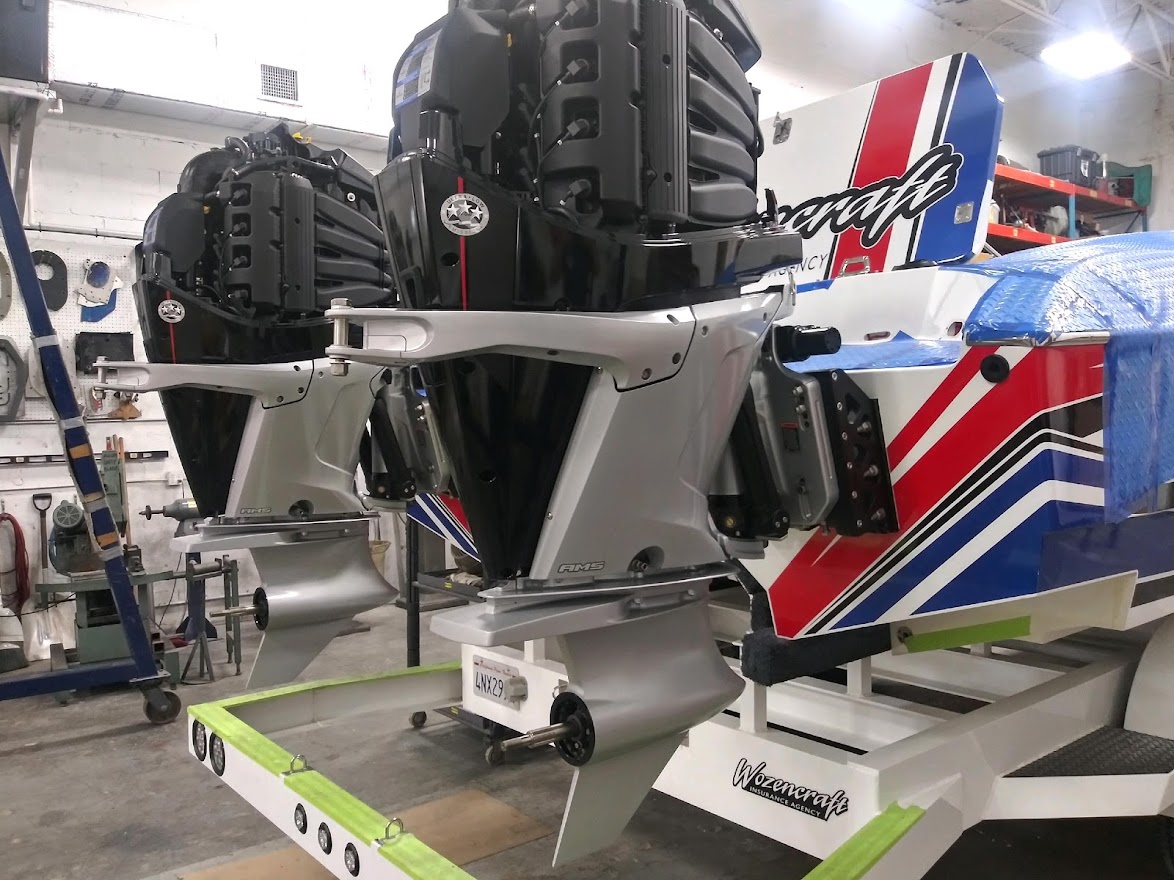 “It’s like a new boat,” said Wozencraft. “We started with 32-pitch Mercury Racing CNC Cleaver props and are running 106 mph at 5900 RPM. Redline is 6400 RPM, so there’s more engine speed to use and we’ll be trying a different set of CNC props when they are available. I’m not a guy who needs to run wide open all the time, and how often do you get those conditions anyway? And there are so many other benefits with these motors. One thing to note is that the 300R motors are slightly heavier and place the prop about 5.5 inches further aft than the 300XS, which can produce more bow lift than is desirable. I am considering reducing the bracket set-back, and filling notch at the transom, which will add about 12 inches to the running surface to hold the bow down.

“One significant performance improvement is the mid-range power offered by the 300R motors,” Wozencraft adds. “If you run a cat like my Skater, you know there’s that hop moment, when air packs in the tunnel but can’t escape out the back because the boat has not lifted enough. That happens between 60 and 80 mph in this boat, and with the 300XS that would be a surprise to my passengers. The 300R motors accelerate so quickly through that moment that I hardly notice it now.”

This repower project resulted in a more-enjoyable boating experience, says Wozencraft. Watch for him, and his “business card boat,” at poker runs across the country this season.