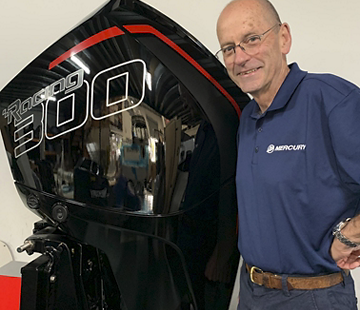 After a life racing and selling the biggest and best engines on the water, Peter Massina has announced his retirement from Mercury ANZP but, while he’s stepping away from work, there’s no way he’s leaving the sport he loves.

As a young boy growing up in regional Victoria, Peter seemed destined to have a life in racing.

“My dad was passionate about all sorts of motorsport, on land or in the water, so we were always attending events or going fast ourselves,” he said.

“I became fascinated with racing and engines and I still follow motorsports, particularly all forms of boat, car and motorbike racing. I just love it.”

He turned his passion into a profession, becoming an apprentice marine mechanic in 1973. It was a particular Mercury engine that sparked what would become a stellar career in racing – the 175hp two-litre V-6 released in 1976 – which was a totally new concept for the brand and drove a new generation of Mercury Racing engines.

He began building his own race engines in 1980 and such were his skills that the Massina name soon became synonymous with success. From building engines to running teams, he’s had a career that has earned him multiple national championships across all three of Australia’s ultra-competitive racing categories including circuit, offshore and ski racing.

Speeds in the latter regularly exceed 100mph, putting huge stress on the engine, the boat and the skiers.

“To win national titles across all three disciplines is something I’m pretty proud of. Winning at that level is never easy, but I’ve been lucky enough to work with some great boat owners, drivers and skiers,” he said.

“The one consistent throughout has been Mercury. Their commitment to racing has been exceptional, more so than any of the other outboard companies, going right back to the achievements of Carl Kiekhaefer.”

Over the decades, he’s seen a huge amount of change – from open boats with little in the way of technology to super-fast closed cockpit boats with data logging and enormous power.

“The advances in technology have been incredible. If someone had told us back then that they were going to build a 450hp outboard not much bigger or heavier than the contemporary engines, you would never have believed them,” he said.

And that’s to say nothing of the Mercury Racing 1350hp QC4V monster power plants Peter’s been selling to ski racers across Australia.

“The power is just amazing but improvements in reliability have also been phenomenal. It’s testament to the ongoing investment that Mercury has made across the years.”

After spending the past 15 years with Mercury, with latter part of those as the Sales Manager for Mercury Marine Racing Australia/NZ, Peter is retiring. But he won’t be lost to the racing scene.

“I’m still involved in technical roles with Offshore Superboats and in the Australian Formula Powerboat GP Series, so I will still get my fix.

“I will, however, absolutely miss working at Mercury. Just a great group of people and a really rewarding place to work. I’ve enjoyed every single minute.”