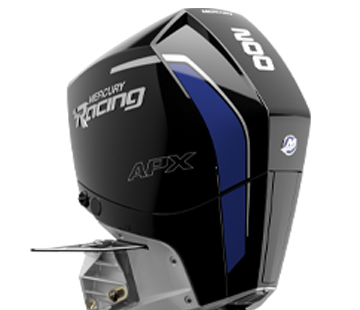 “The new 200 APX is designed to deliver outstanding performance while reducing the cost of maintenance and fuel for F2 and OPC race teams, many of which are amateurs,” said Stuart Halley, Mercury Racing general manager. “Mercury Racing is also striving to produce high-performance and competition engines that keep emissions to a minimum, and the 200 APX helps push that effort forward.”

On both the UIM F2 and APBA OPC circuits, racers compete carbon fiber tunnel boats about 16 feet (4.8 meters) long and weighing as little as 1,130 pounds (513 kg) including the engine and driver. The F2 boats raced in Europe are capable of a top speed approaching 120 mph (190 kph), and can accelerate from zero to 60 mph in just 5 seconds. Up to 20 boats tear around a two-pin course together, dodging spray and wakes in a thrilling show for fans viewing in person and remotely.

The 200 APX is the first V6 four-stroke outboard produced by Mercury Racing. The powerhead is based on the Mercury Marine 3.4-liter double overhead cam/four-valve powerhead with a 64 degree cylinder angle. To prepare the engine for competition, Mercury Racing raises the compression ratio from 10:1 to 11:1, increases peak RPM from 5800 to 6800, and fits a lightweight carbon fiber cowl that incorporates forced cold air induction. A lightweight flywheel allows the engine to rev more quickly than the stock motor. The engine requires 91-octane (98 RON w/ E10 max) pump gasoline fuel. The 200 APX retains a digital throttle control, and is equipped with a 24-volt starting system.

The 200 APX uses the same robust 12-inch midsection as the Mercury Racing 360 APX V8 competition outboard, with a structural wet sump driveshaft housing and integrated power trim and lift with remote pumps. To increase propeller speed to match that of the 8000-RPM two-stroke racing outboard presently used in F2 and OPC, an overdrive spur gearset increases the input shaft speed to the gearcase, and produces the desired left-hand propeller rotation.

“The 200 APX produces about 20 percent more torque than the two-stroke motor, but at a lower RPM,” said Mercury Racing Director of Engineering Jeff Broman. “With the overdrive gearset we can swap some of that torque to increase propeller RPM, which allows most teams the opportunity to use the same propellers they have been fitting to the two-stroke motor, a big cost savings for the race teams.”

An evolved version of the Mercury Racing Super Speed Master (IV SSM) outboard gearcase is direct-drive with no neutral or reverse shifting. Above-water exhaust offers unrestricted flow and produces an exciting tone for racing fans. The motor is equipped with integrated, light-weight steering arms for tunnel boat cable steering. The top cowl features robust latching and sealing systems, while the carbon fiber driveshaft cover has quick-release fasteners to ease access to the midsection.