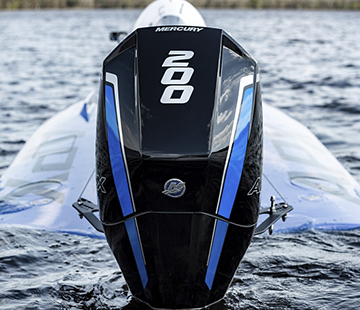 Lake Havasu City hosted exciting outboard powerboat endurance and sprint racing from 1964 to 2001, featuring some of the most renowned racers and historic boats and motors in the history of the sport. Now powerboat racing returns to Havasu after a 20-year hiatus, on its traditional site off the shore of the Nautical Beachfront Resort, and coincides with the 50th anniversary of the placement of London Bridge over the lake’s Bridgewater Channel.

“Lake Havasu is one of the iconic venues in the history of powerboat racing,” said Mercury Racing General Manager Stuart Halley. “Many great battles between racers, teams and engine manufacturers have taken place at this oasis in the desert. Like all racing fans, Mercury Racing is excited to see fast boats back dueling in front of the Nautical Resort.”

The Lake Havasu Classic will present a double-header racing weekend for the Formula 1 class with a complete program on both Saturday and Sunday. The Sunday winners will be crowned APBA North American Champion in Formula 1 and Tri Hull classes, while the APBA Western Divisional Championships will be hotly contested in the Formula Lights division.

Mercury Racing will have a presence throughout the weekend at Lake Havasu. A highlight will be the in-water debut of the new Mercury Racing 200 APX competition outboard, a 3.4-liter V6 four-stroke model designed for UIM F2 and APBA OPC tunnel boat racing. Rated at more than 200 horsepower, the 200 APX outboard offers racers a very durable powerhead and the latest in four-stroke engine technology, while reducing exhaust emissions by 90 percent compared to the Mercury Racing 200 XS two-stroke outboard currently in use in these classes, which is no longer in production.

Many past Havasu Classic drivers will be appearing during the event, including the legendary Mercury factory pilot, Bill Seebold, who will host the Racers Reunion driver’s party Friday evening at the Lake Havasu Museum of History’s Mind of McCulloch Exhibit at the London Bridge Beach. Mercury Racing will showcase classic competition outboard motors at the vintage boat display on London Bridge Beach on Saturday and Sunday.