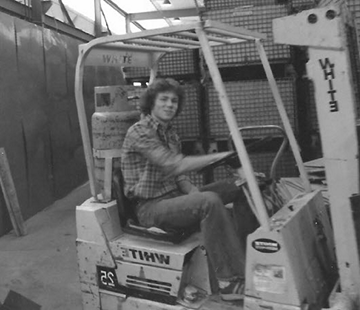 An Intuitive Understanding of Propeller Performance

Mercury Racing Propeller Manager Scott Reichow, for decades a respected source of design vision, innovation, and prop wisdom to racers and high-performance boat owners, retired on January 29, closing out a career with the company that began in 1977.

“Scott has been the guy boat builders, Mercury Racing dealers and our customers have turned to for advice and propeller product knowledge,” said Steve Miller, Mercury Racing director of marketing, sales and service. “At boat shows, poker runs, dealer meetings, fishing tournaments, and races, people were always looking for Scott, and he could speak with passion and intelligence about propeller performance with anyone, from offshore racers to walleye anglers.”

Reichow will pass the propeller torch to Nick Petersen, who assumes the role of Performance Propeller Manager at Mercury Racing.

“I was racing motocross with the son of Gary Garbrecht, who had retired from tunnel boat racing to become the first manager of Mercury Hi-Performance,” recalls Reichow. “The shop was located on the river in Oshkosh, and right after I graduated from West High School he offered me a job in the parts department. The business was all about racing at the time, so we were always on call to help the racers. More than once Gary would find me on Friday and ask ‘kid, what are you doing this weekend?’ and I’d be sent off on some mission. Once it was to drive to Indianapolis on Saturday to pick up an outboard powerhead and bring it back to the shop for a re-build. On Sunday, I loaded the refreshed powerhead back into the trunk of my Camaro and drove it back to Indy. And turned around and drove home.”

Reichow was promoted to Mercury Hi-Performance sale and service rep in 1979, just before the oil embargo and result gas shortages devastated boat sales in the U.S.

“That was the end of the factory racing team, and I’d been saving for college and decided this was a good time to get back to school,” said Reichow. He attended University of Wisconsin-Oshkosh, graduating in 1986 with a degree in marketing, and then spent the summers of 1987 and 1988 driving and managing the Mercury Hi-Performance parts truck at races across the United States. He worked during the week in the Mercury Marine warranty department, and later moved to Mercury Exhibits, where he helped design displays for boat shows and dealer meetings. He left in 1995 to try his hand at some personal business ventures, but returned to Mercury in 2000 as a manager for Mercury, Quicksilver and Typhoon propellers. “In 2003, after Dennis Cavanaugh died unexpectedly, Fred Kiekhaefer offered me the opportunity to move over to Mercury Racing as the custom propeller manager,” said Reichow. “At the time Mercury Racing offered just a handful of propeller models, and we were selling in a year what we sell in two months today. The sales emphasis at Racing was moving from serving competition boats to serving performance pleasure boats, and that opened up a lot of new opportunities for us.”

“I’d always been into performance, racing motorcycle and karts, but I’m not an engineer, so I had a lot to learn,” said Reichow. “Ron was a key contributor to my growth in that regard. He lived and breathed propellers, designing them and using them. For five years I was a sponge, soaking up all that knowledge and experience. Every time Mercury Racing came out with a new product, there was an opportunity to develop a propeller for that engine or drive. The prop line really expanded.”

Reichow says the development of the modern Mercury Racing propeller line started with a phone call from Fountain Powerboats.

“Marty Boosinger at Fountain was setting up a boat with our Maximus props, and was just getting too much stern lift,” said Reichow. “We got the idea to cut down the barrel of a Bravo prop by 5/8 inch, and took some diameter off the blades. Boosinger called and said he’d picked up 7 mph with those props. That was a real ah-ha moment for us, in terms of thinking of ways to tune propellers.”

An avid walleye angler, Reichow was disappointed with the performance of the three-blade Tempest prop that was popular with walleye and bass tournament anglers. The prop produced too much bow lift on hole shot, and would not stay hooked up in rough water.

“I modified a four-blade Bravo prop by cutting down the barrel, and adding vents, and came up with our Pro Finish for that prop,” said Reichow, “so it would be more precise than a stock prop but not as expensive as a Lab Finished prop.”

The result was the Mercury Racing Bravo I XS for Mercury Pro XS outboards, and later the Bravo I FX for Verado motors, props that offered better stern lift and bite, and could run higher than the Tempest, while often matching that prop’s speed.

“We have always looked to opportunities,” said Reichow. “We developed the MAX5 prop specifically to match the performance of the Mercury Racing 400R outboard, for example, and that was another home run.”

Over the years Reichow developed an intuitive understanding of how propellers worked and, more importantly, how a propeller could influence boat performance.

“We could always trust Scott’s experience,” said Myrick Coil, veteran racer and shop foreman at Performance Boat Center in Osage Beach, Mo. “I could often just tell Scott how the boat felt on the water, and that was enough. He knew what it would take to make the boat run better and faster, and he’d take care of us. More than once I was waiting on the UPS truck in a hotel room in Key West, trusting that Scott would have a perfect set of props in my hands for race day.”

Reichow plans to devote his retirement to hunting, fishing, biking and spending time with his grandchildren.