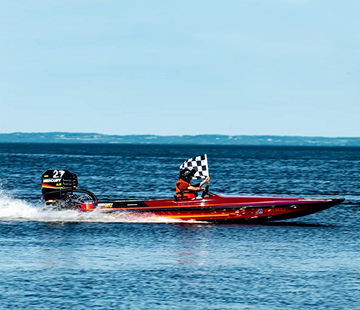 UMPBA drag racing takes place on an 800-foot course, organized in five brackets based on a break-out speed. If a racer exceeds the break-out speed for that class, they are eliminated. Racing is open to boats powered by outboards, inboards and jet drives.

In Lake Racer 1 (66 to 75 mph) saw 7 entries, with Kristian Kozan winning first place for the second consecutive race this season in his 1983 Sterling Tunnel 260 powered by a 2.5 Mercury Racing 260 outboard. In second was Marc Gajdos in a UFO boat, followed by Mark K. in a Hydrostream.

Fourteen boats entered Lake Racer 2 (76-85 MPH), one of the most-competitive fields of the day. Mark Kirby prevailed in a Mercury-powered 1998 Mirage River Racer. George Girtin took second in his first race of the year in his 1990 Mirage Jaguar, and the 2002 QuarterShot T1 driven by Scott Bilda came in third.

Lake Racer 3 (86-95 MPH) was a fan favorite, with two top female drivers in another highly competitive field of 14 boats. Kilea-Ann Kleckner, at just 17 years old the youngest driver at the event, took first place with no losses in a Mercury Racing-powered 2020 QS1. Brett Seubert took second with a STV River Rocket , and his wife Jena Seubert took third in a 2010 Mirage River Racer.

The last class of the day was Lake Racer 4 (96-105 MPH) with seven entries. Steve Cleinmark won for the second time this season in a 1998 Alison xr 2001 powered by a Mercury Racing 260 outboard. Rick Conklin, grandfather to Kilea-Ann Kleckner, placed second after some quick modifications to the 2020 QS1. Russ Peterson took third driving a 2008 STV River Rocket powered by a Mercury Racing 280 outboard.

UMPBA is an organization built on trust and integrity, with limited rules and bracket-style racing based on boat speed, the races have a spot for everyone.  Two events remain on the UMPBA 2021 schedule: August 14 in Stevens Points, Wis., and September 11 in Rice Lake, Wis.