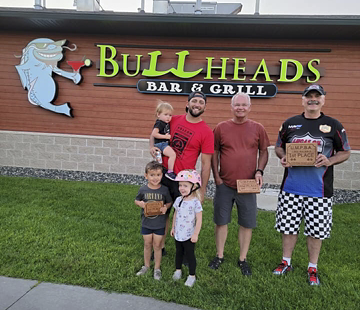 The Upper Midwest Power Boat Association (UMPBA) hosted its largest drag racing event of the 2021 season on August 14 in Stevens Point, Wis., with 63 race entries speeding down the Wisconsin River in front of Bullhead’s Bar and Grill. Mercury Racing-powered boats finished on the podium in each class.

UMPBA drag racing takes place on an 800-foot course, organized in brackets based on a break-out speed. If a racer exceeds the break-out speed for that class, they are eliminated. Racing is open to boats powered by outboards, inboards and jet drives.

The first class up was Lake Racer for boats running up to 65 mph. The eight-racer field featured Kizo Hurtienne, a new member to UMPBA piloting his 2016 Homemade Tunnel. Ultimately, Scott Kunke, racing for the first time this season, came out on top of the class in a Baker Mod VP x-18. Gary Corbonneau, traveling back to Wisconsin from Vermont, was second in a Liberator powered by a Mercury Racing 200. The Mercury Racing-powered Sleekcraft Aristocrat driven by Ryan Nuske rounded placed third.

Lake Racer 2 (76-85 mph) featured a field of 16 boats and some close racing action. Kristian Kozan guided his Mercury-powered Sterling to a second class win of the day, followed by George Girten in a Mirage and Mark Kirby in a Mercury Racing-powered Mirage River Racer.

After a quick intermission, 20 boats formed up to contest the Lake Racer 3 class (86-95 mph). Fan favorite Joe Peroceschi charged to the win in a Mercury Racing-powered Mirage Wildcat. Mercury Racing outboards also powered Bob Carlson in a Eliminator Daytona and Kyle Cleinmark in an Allison xr2002 to spots on the podium.

The event featured great racing and fast boats, and UMPBA partnered with Bullheads Bar and Grill to raise funds for the Dewey Volunteer Fire Department. The Upper Midwest Powerboat Association will be hosting its last race of the season in Rice Lake, Wis., on September 11th.