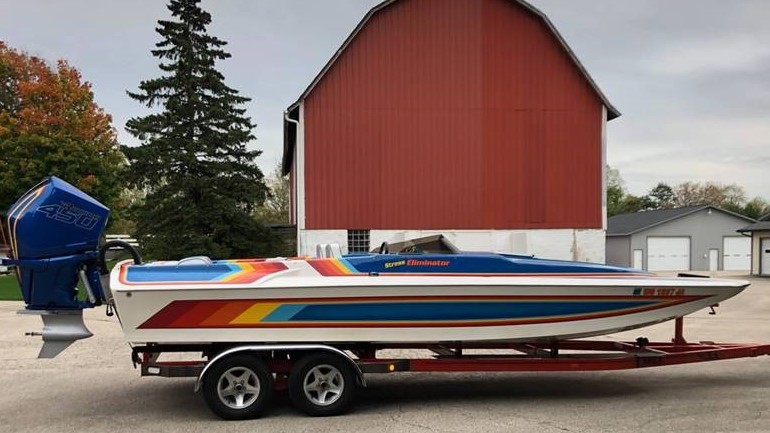 It was a classic case of love at first sight. Who could resist eight elements of gelcoat striping laid down in colors and patterns that once were the highlight of high school daydreams, graphics so long out of style that they’ve become nostalgic. Not Johnny Bauer, that’s for certain, who learned how complicated love can be, especially when the object of affection is a boat.

In 2014 Bauer became aware of a 1987 Eliminator 23 Daytona for sale in Texas, a long way from his home base in Wisconsin, where he works as Lead Engine Calibration Technician at Mercury Racing.

“I have always been attracted to the look of the gel schemes of performance boats from the 1980s and early 90s,” said Bauer. “I knew the boat had a rotten transom, but the price reflected that fact. I could not get away to inspect the boat myself, but I had a knowledgeable friend look it over, and I decided to dive in.”

In January, 2014, Bauer, who is known as “Johnny B” around Merc Racing, drove to Texas and trailered the boat back to frozen Wisconsin. A quick inspection in his home shop confirmed the soggy transom, and also revealed even more disappointing news – a suspect floor over rotten stringers. It would take five years and approximately 2,000 man-hours before the boat Bauer dubbed Stress Eliminator could hit the water.

“It was re-launched August 7, 2019, exactly 32 years to the day after the boat rolled off the line at the Eliminator plant in Shawano, Wis.,” said Bauer. “It was quite a journey.”

Bauer documented the project in incredible detail in a 20-page forum post at River Dave’s Place. Some might consider the amount of work Bauer put into the Eliminator to be, well, obsessive, and he will be the first to admit that he did not anticipate how deep he’d get into refurbishing this boat.

“I guess it’s just my personality to never quit on a project,” said Bauer. “I wanted the boat to be fast but solid. My family was going to ride in this boat.”

By the time he was done Bauer had replaced the transom and stringers, installed new bulkheads and framing, trued the bottom and cut the aft pod out of the hull and replaced it with a shallower pod (this was done twice), replaced the floor, replaced the dash, and installed an audio system. The interior was reupholstered and the floor covered in custom-cut SeaDek. When he was done – if a project like this is ever done – Bauer had re-worked just about every element of the Eliminator, except the colorful Reagan-era gelcoat on the hullsides and deck.

Bauer, an engineer who has worked for Mercury Marine for 27 years and since 2004 at Mercury Racing, has spent his career creating horsepower in everything from snowmobiles to Hemi-powered pulling tractors to high-performance marine engines. Boat building was not part of his skill set before the Eliminator project, however, and it’s fascinating to read his forum posts and, with the help of some talented friends, see what he learned and accomplished in a haze of sawdust and resin fumes.

Of course a motorboat needs a motor, and Bauer hung a Mercury Racing 400R on the transom of Stress Eliminator and after dialing things in saw 102 mph on the helm’s VesselView display. Not bad.

“When we got done the boat weighed 3,300 pounds with the 400R and no fuel,” said Bauer, “which is almost exactly what it weighed with its soggy transom. The boat feels really solid. I think it’s safe to say I’ve got the stiffest Eliminator 23 Daytona on the water.”

In October 2021 Bauer swapped the 400R outboard for a new Mercury Racing 450R, because why not have a V8? He expects to see 107 mph with a 32-pitch Mercury Racing CNC Cleaver prop once the boat is dialed in this spring. Both motors are custom painted in Mercury Racing blue, but Bauer of course took things a step further and hand masked a four-color striped scheme on the cowl of the 450R that ties into the graphics on the boat.

Bauer’s passion, not just for performance but for doing things the right way, the best way, is the philosophy he brings to work every day at Mercury Racing, whether he’s working in the dyno lab or testing in the field. That passion for excellence is built into every Mercury Racing product. It’s the only way to go Wide Open.