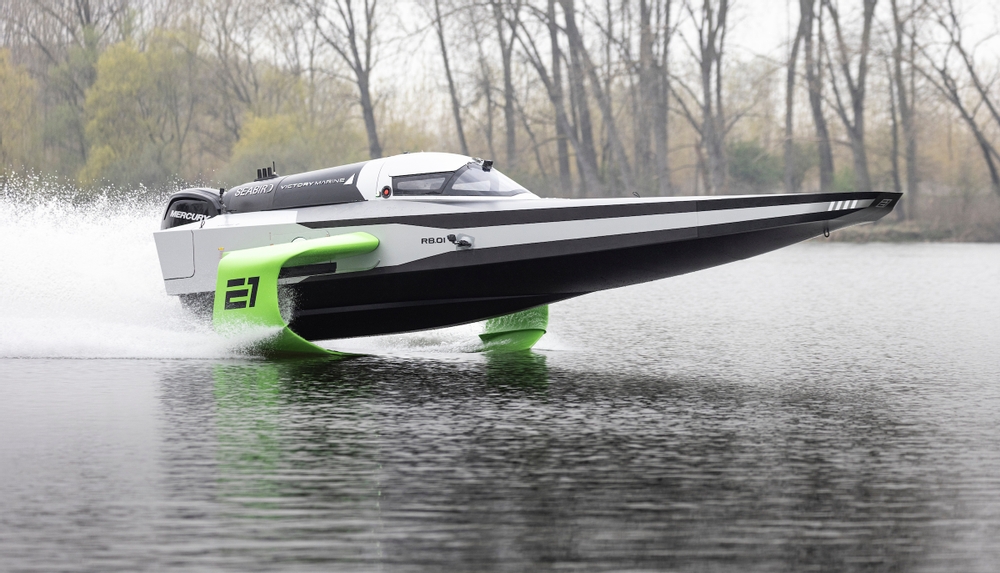 Mercury Racing has completed work on the first E1-X, a prototype electric outboard  for the E1 Series, a new powerboat racing series expected to debut in 2023. Mercury Racing joins the E1 Series as Official Propulsion and Propeller Partner and will contribute to development of the propulsion architecture and propeller.

A team led by Jeff Broman, Mercury Racing Director of Engineering, created the prototype electric outboard that was used in Italy for initial testing. The test runs took place on the River Po in San Nazzaro, a popular race boat test site located about two hours east of the Victory Marine facility in Turin. The very first prototype RaceBird, a hydrofoil-type boat designed for the E1 Series by SeaBird Technologies and Victory Marine, was used for the first round of testing. The test boat has adjustable main hydrofoils that can be used to find the boat’s ideal lift and balance characteristics during testing. This foil will be fixed on the production race boat during running, but adjustable by the teams between races.

“The first round of testing has been completed,” said Broman, who was on site. “The boat was rigged with cameras and data acquisition technology, and all of that information is being studied now. At Racing, we never stop pursuing perfection – so there is always work to do -- but the initial results look very good.”

The E1-X outboard designed by Mercury Racing incorporates a 200hp (150 kW) electric motor and an inverter, both of which are liquid-cooled. The outboard also supports the aft hydrofoil, which was designed and fabricated by Mercury Racing. Navico, a part of Advanced Systems Group by Brunswick, joins the E1 Series as Official Marine Electronics and Cartography Supplier incorporating its Simrad and C-MAP brands.